The year 2020 is of course the 100th anniversary of ratification of the 19th Amendment to the US Constitution, which finally gave women the right to vote. As part of this centennial celebration, the LCHS, in cooperation with the League of Women Voters and over a dozen other non-profit organizations put together an exhibition entitled “It was ‘We, the people’; not ‘We, the white male citizens’…..”: The 19th Amendment Centennial. This exhibition, which opened just before the pandemic and will resume once we reopen, of course required a tremendous amount of research. Some of this research was on the movers and shakers of the suffrage movement who we all have some level of knowledge of, such as Susan B. Anthony, who provides the exhibition title in one of her speeches. Other research focused on people and topics that are lesser known, at least to me, anyway. 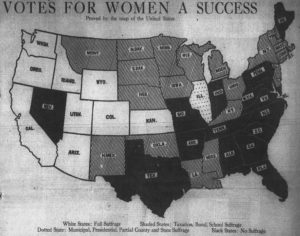 Now, as most people probably know, in certain areas of the US, women were allowed to vote prior to 1920 and the passage of the 19th Amendment. One of the earliest examples of women’s suffrage in America was in Wyoming, where they allowed equal suffrage as a territory, and upon demanding that their women remain allowed to vote, became the first state admitted to the Union allowing women to vote in 1890. Over the next thirty years, other states joined them piecemeal, until the country was fairly evenly split by 1914 (Map on Left). Some states allowed women to vote in only local elections, others in local and state, and still others granted full suffrage. Pennsylvania was not one of these states. That I knew. What I didn’t know was that the commonwealth held a referendum on women’s suffrage in 1915.

During the campaign before the suffrage vote, a 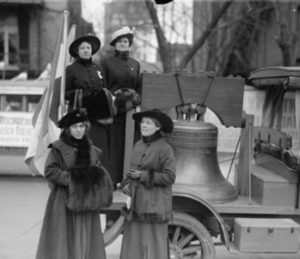 2,000 lbs bronze replica copy of the Liberty Bell was cast and went on campaign stops across the Commonwealth. Other than not featuring the original’s famous crack, the only other change made to the Bell was the phrase “and establish justice” added to the bell’s inscription.  Due to this, the replica became known as the Justice Bell. The bell started its statewide tour in Bradford County in the Spring of 1915 and would cover well over 5,000 miles across the Commonwealth before the fall election. While on tour, speakers would show the audiences that the bell’s clapper was symbolically chained down, and it would only ring out once suffrage was granted.

Unfortunately, while the referendum did pass in Luzerne County by a vote of 14,639 to 11,501, the state as a whole shot down the bill by the margin of 441,034 to 385,348 (bottom map). With World War I hotting up in Europe and the US soon to be involved in it, the PA women’s suffrage movement would simmer on the back burner, and would not take the forefront of state politics again until the passage of the 19th Amendment. The Justice Bell would remain chained and would not ring out for over five years after it was finished. 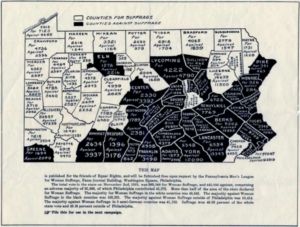 Forgotten Heroes: Women and Their Fight for the Right to Vote