Bringing The Giant to Its Knees, A Brief History of the Giant’s Despair Hillclimb: Part II -The Golden Anniversary Brings About A Golden Age 1951 – 1985 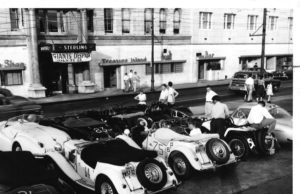 In 1951 after being dormant for 35 years, Giant’s Despair was reborn. The revival of “The Giant” coincided with a post-war boom in auto racing interest throughout America. American G.I.s had spent the years after the war in England watching the small, two-seat sports cars so popular in Europe race around the dozens of now disused airfields, and had fallen in love. Many, upon returning home, had used their money from the G.I Bill to purchase such cars, and they helped introduce this type of racing to America. The course, now heavily modernized and fully paved, was shortened to an even mile from the previous 5,700ft, creating the 6-turn route with 650ft of elevation change that is still in use today. The event generated quite a large amount of fervor by attracting several entries from that year’s Indy 500, and other big name races from both America and Europe. Michigan’s Delleven Lee won the revived event in a Cadillac powered Allard in a time 1:07.5, finally breaking DePalma’s record from 1910.

Starting in 1952, the Hillclimb became the crown jewel of the Giant’s Despair “Big Three”. The hillclimb was the premier event in a triple crown that included drag racing at the nearby Forty-Fort Airport, and road racing for the new “Brynfan Tyddyn Cup” along 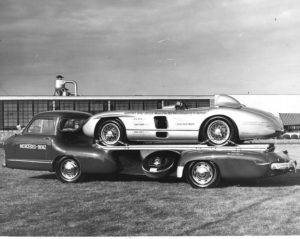 a specially laid out track on the streets near Harvey’s Lake. The 1952 event was advertised as one the first of its kind in America and drew praise from motoring circles. Later, a parade and antique automobile show were added, and the entire five-event package was advertised as “Giant’s Despair Race Week”. As each year went by, the crowds and entry lists grew, and the times fell. However, despite The Giant’s new shorter distance, no one had yet to break the magic minute mark. By 1956 this became the talk of the race. Who would break the minute? What car would he drive? How far under it could he go?

1956 was also the 50th anniversary of the hiIlclimb and the 150th anniversary of Wilkes-Barre’s incorporation. To be able to say you won the golden anniversary climb was enough bragging rights to make any manufacturer’s PR Departments drool. All eyes were on Mercedes-Benz who sent one of their $100,000 ($953,944.03 in today’s money) SLR prototype sports cars that had won the 1955 world title. (Shown in photo above right) 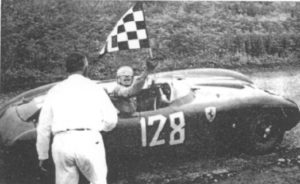 Mercedes weren’t the only ones pulling out the big guns. Ferrari sent one of the Formula 1 cars, powered by a 4.5litre V12 engine. This same car had earlier competed in the Indy 500 at the hands of Grand Prix ace and factory Ferrari driver, Alberto Ascari. The driver in the Ferrari this time however, was an American chicken farmer turned racing driver named Carroll Shelby. The popular Texan took the win, and the record, breaking the minute mark and getting his name on the Hollenbeck trophy. He also won Brynfan Tyddyn that year in a Ferrari sports car, sweeping the 1956 events. (Receiving the winners flag at left)

It was the start of a good run for Ferrari over the next few years (although Shelby’s record would remain intact). Shelby’s Ferrari was not the only bit of Formula 1 machinery in the field, as Bill Milliken entered the AJB/FWD “Butterball Special” 4-wheel drive machine. The British contraption took 3rd overall in 1955, before finishing runner-up to Shelby the following year. In 1959 the hillclimb and Brynfan Tyddyn (by now moved to the old tank testing track in Berwick) were swept by a Porsche RSK piloted a young hotshoe named Roger Penske. (Shown on the starting line below right)

The race would experience its first stoppage since the war years in 1972, when it was cancelled due to the damage and aftermath of Hurricane Agnes. When the race was resumed in the following years, it was dominated through the 1970s by an equally colorful character: Osca 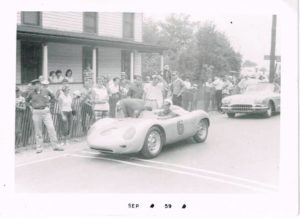 r Koveleski. Winning his first race at Bones Stadium in 1951, Koveleski was already a local legend before he ever strapped himself into the car that would make him famous, the bright orange #54 McLaren M6B powered by a mighty Chevrolet engine and sponsored by his own Auto World slot car stores. (shown below left photo courtesy of the Pebble Beach Concourse)

Oscar would campaign the McLaren across the country in the wildly popular SCCA Can-Am series, (infamously causing the notoriously free-wheeling series to create a rule limiting advertising decals on participating cars) then he would bring it “home” to win at Giant’s Despair. And win Oscar did, claiming King of the Mountain honors 6 times in a 13-year period in his M6 and a Cooper-Chevrolet. His record time of 47.636 seconds in 1969 would not be broken for nearly three decades. 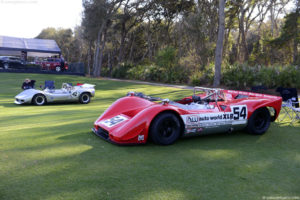 However, while the race was by all appearances going strong, throughout the 1970s the actual road itself continued to deteriorate. Likewise, rowdy fans, particularly those who would camp for the weekend around Devil’s Elbow and often times throw rocks and liquor bottles at competing vehicles and set fire to anything and everything, ruined the family friendly nature of the event and had many calling for better security. Finally, in 1981, citing poor road conditions, lack of crowd control and spiraling insurance costs, the penny dropped, and the hillclimb was shelved.

The race would not be run again until 1986, when local hero Tommy Van Scoy would take the win on a newly repaved surface. The race has thankfully been run uninterrupted ever since. Part III: 1986-Present coming soon!