Did You Know that Wilkes-Barre Had a Palm House? 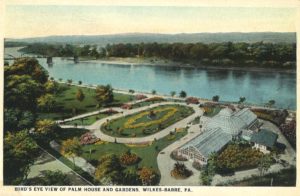 Shortly after I started as Executive Director of LCHS, I came across an image of Wilkes-Barre’s “palm house.”  I was fascinated. “How cool!,” I thought, “What were the circumstances for that, and what happened to it?” However, as I started to look around in order to learn more, it was a bit more challenging than I expected. We have many postcards of the palm house, but not as many published sources that tell its story. Here is what I have learned so far!

Inspired by the “city beautiful” movement (read more about it here: http://paconservationheritage.org/stories/the-city-beautiful-movement/), the City of Wilkes-Barre established a Parks Commission in 1906.  This was around the time that the current Luzerne County Courthouse was being built. As far back as the 1770s, the River Common had been set aside as a public park, so it was a natural spot to “beautify” by the early 1900s.

Research in the Wilkes-Barre newspapers tells us that the palm house was part of a larger greenhouse project and was built on the River Common near Union Street in 1913. In February 1913, the Wilkes-Barre Semi-Weekly Record bragged that “when completed, the structure will be one of the most modern of its kind in the country.” Built at a cost of almost $15,000, the completed structure was 136 feet long and included two “wing houses” measuring 28 feet by 50 feet. It was built by William Lutton of Jersey City, New Jersey, who held a patent on a curvilinear greenhouse. This curved design was chosen so that the greenhouse would have a design relationship with the Courthouse (which was completed in 1909). You can check out an advertisement for Lutton Greenhouses, which employs the Wilkes-Barre greenhouse as a marketing tool, at https://books.google.com/books?id=BYU3AQAAMAAJ&pg=RA2-PA69&lpg=RA2-PA69&dq=lutton+greenhouse+wilkes-barre&source=bl&ots=lDAoDLg1db&sig=ACfU3U2UECxkujOI5u8NMb7fvIpgoCqzsg&hl=en&sa=X&ved=2ahUKEwisj5y1_-TjAhWoiOAKHfEMAuAQ6AEwAXoECAkQAQ#v=onepage&q=lutton%20greenhouse%20wilkes-barre&f=false

Sure enough, the greenhouse seems to have been an impressive structure. On opening day, November 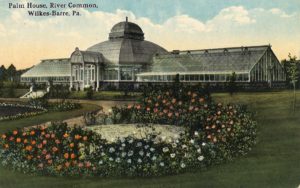 22, 1913, The Wilkes-Barre Record reported that the greenhouse “promises to become one of the city’s interest centres and one of the most valuable advertising mediums.” Judging solely from the large number of postcards of the greenhouse in the Society’s collection (we have included a few as illustrations here), this was true – and, indeed, it was a popular attraction for area residents and tourists alike. In an interesting side note – one newspaper article from 1913 noted that a number of city residents asked if they could donate large palms and air plants that had grown too large for their homes. City officials “gladly offered to take the plants off the people’s hands and will be able to use them to an excellent advantage for exhibition purposes in the palm house”!

The greenhouse included the “palm house” for exhibits – at its opening in November 1913, there were over 15,000 plants on exhibition! One “wing house” was used to grow foliage, flowering and bedding plants for use in the city’s parks. The other was used to grow sub-tropical plants. A tree nursery at the back had about 6,000 trees and shrubs at the opening. City officials estimated that it would pay for itself in seven years by allowing the city to save on purchasing plants and flowers for its parks. In addition, local public school children visited the greenhouse to learn about plant life. 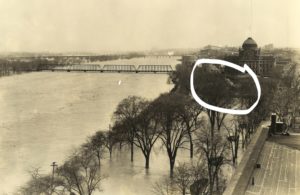 Sadly, the March 1936 flood of the Susquehanna River damaged the greenhouse and it never recovered (the photo at left from the LCHS collection shows the River Common shortly after the flood; the circle emphasizes the greenhouse). The Great Depression had already been taking a toll on the availability of funds to keep the greenhouse operational and the flood was the final straw. Parts of the greenhouse remained on the River Common for a decade or more after the flood and were used in limited ways. City residents engaged in spirited debate about building a dike after the 1936 flood. Many expressed a preference for uncompromised water views from the River Common, like this person, quoted anonymously in the Wilkes-Barre Times Leader on September 11, 1936, “Save the River Common and eliminate floods by deepening the channel of the Susquehanna River.” In the end, the US Army Corps of Engineers built an earthen levee in the 1940s, compromising the view and attempting to protect the city’s homes and businesses, and the greenhouse was eventually demolished.