Frances Dorrance and the Indian Survey – A Crusader for Local History 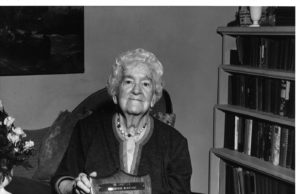 Rather archaically named, the Indian Survey was the first statewide archaeological survey in Pennsylvania, and was only made possible through the hard work of Frances Dorrance (1877-1973), the Luzerne County Historical Society’s first executive director.

In 1922, Christopher Wren, the corresponding secretary and librarian for the Wyoming Historical and Geological Society (WHGS) (now known as the Luzerne County Historical Society), died. Frances Dorrance was appointed as Christopher Wren’s replacement (eventually with the title of Executive Director) on November 1, and immediately went to work. Colonel Dorrance Reynolds, the WHGS President at the time, wrote in the 1922 President’s Report that “you could not have found a more qualified, or abler person, or one more interested in your work” than Dorrance. She pushed for history education by experimenting with open hours to increase availability to the public and designing programs to engage children. She published old and out-of-print research papers in ensuing WHGS Proceedings (which are still available for purchase in hard copy (including here on our website and in our gift shops), and, in some cases, available digitally for free on Google Books). But most important were Dorrance’s efforts to preserve local history.

In 1923 (her second year as director), Dorrance initiated a Survey of Native American Rock Shelters in the Wyoming Valley by archaeologist Max Schrabisch. As stated in the 1926 WHGS Proceedings:

“The necessity for haste in making field investigations for the Survey is evident from the Destruction in the Wyoming Valley, observed by Mr. Schrabisch. Great stretches of the state, still untouched by the advances of civilization, lie ready to give up their evidences of Indian occupation for the digging. At present, less is known of the prehistory of Pennsylvania than any other state in the Union.”

Because of these observations, Dorrance began the Indian Survey in March 1924. Described as an “exploring expedition on paper,” the survey was sent to museums, historical societies, and local authorities throughout Eastern Pennsylvania. The purpose was to research written records of Native Americans, preserve and arrange collections for future generations, and to make an initial effort to preserve the surviving remains of Native Americans and scientifically study them.

In 1926, the Indian Survey expanded to include western Pennsylvania, and became the first statewide survey of its kind in Pennsylvania. It was ambitious, and the WHGS couldn’t complete such a large survey on their own. In 1927 Dorrance appealed to the state government to form an archaeological commission. They did not grant her one, but instead appointed her to the State Historic Commission (PHC)(now known as the Pennsylvania Historical and Museum Commission (PHMC)), which formed an archaeology committee to better complete the survey. She served on the PHC until 1955.

In the end, over 1,900 sites were documented across the state (see below), which directed further study.  Dr. Frank Speck’s “A study of the Delaware Indian Big House Ceremony,” Max Schrabisch’s “Archaeology of the Delaware River Valleys,” Dorothy P. Skinner’s research among the Shawnee and Seneca, and the Safe Harbor excavation under Donald A. Cadzow were direct results of the study. 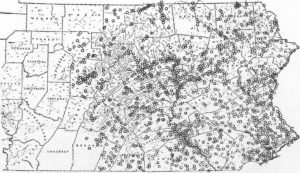 Although many sites were identified, it would require quite a lot of work to maintain, preserve, and study them. “As progress goes, it’s apparent a permanent central organization is needed,” said the WHGS President’s report for 1929. As a solution, Dorrance, along with J. Alden Mason, organized the Society for Pennsylvania Archaeology, and served as its president for a time. The society is still active, and the local chapter #11 is named after Frances Dorrance. The group is currently digging at the Conrail Site.  (Check out their Facebook page!)

Frances Dorrance had a lasting impact on local history, beyond the Indian Survey. She started the PHMC’s research collection when she donated materials from her research into the Sullivan Expedition, she served as Vice President of the Pennsylvania Historic Institute, and she was awarded a multitude of awards and honors for her work in preserving local history, including the J. Alden Mason Award from the Society for Pennsylvania Archaeology, and named a Distinguished Daughter of Pennsylvania.