Will You “Capitulate” to Reading Our Blog?

Welcome! This is the first post in our LCHS blog! We plan to post regularly and to focus on our amazing collection of objects, documents and published materials that relate to the people, places and events in Luzerne County’s fascinating history. We hope that you will read our posts, ask questions, make comments and come visit our library, museum and historic houses in person. Read on for the story of one of our most iconic collection items – the “Capitulation Table.” 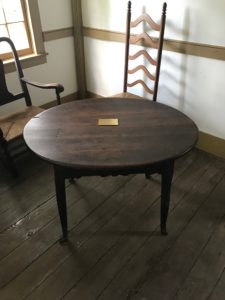 The table was given to the Luzerne County Historical Society in 1910 by Miss Carrie Myers. The description in the accession book gives the table’s story in one sentence: “The table on which the capitulation of the American Forces to Col. John Butler was written July 3rd 1778.”

If you are familiar with Wyoming Valley history, you know exactly what this means. On July 3, 1778, the Battle of Wyoming, between the British forces (with their Native American allies), led by Col. John Butler, and the local American militia, led by Col. Zebulon Butler, took place in Wyoming and Exeter. It did not end well for the American revolutionaries. Lasting only 45 minutes, the battle resulted in the death of 200 to 300 (estimates vary) of the almost 400 Americans who marched out to meet the British. Although it was one of the worst American defeats of the Revolutionary War, the Battle of Wyoming had a silver lining – it motivated the American cause, helped to create early American Indian policy and spurred the British public to turn against the war.  You can read more about the battle on various websites, like this one: http://pabook2.libraries.psu.edu/palitmap/BattleWyoming.html.

On July 4, 1778, the Americans and British agreed to sign the capitulation document, but they needed a table to do it. Tradition tells us that Thomas Bennett’s cabin inside the fort had a suitable table that was used for the signing. Col. John Butler signed for the British, while Col. Nathan Denison signed for the Americans. What happened next to the table? How do we know that this is really THE table? 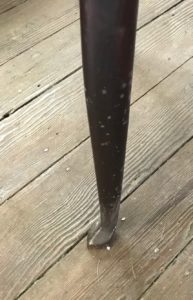 There is no written record that gives us ultimate proof – we have to trace the ownership of the table and other evidence and then evaluate what we learn. Objects like this were often handed down in families and this is true for the table. From Thomas Bennett, the table went to his daughter, Martha Bennett, who married Philip Myers. It was passed down to their son, John Myers, and then to his son, Philip Henry Myers, and finally to his daughter, Carrie Myers, who gave it to the Society. This part of the evidence is strong – the ownership of the table remained in one family, making it easy to trace and its significance was well-known from 1778 until 1910 when it was given to the Society.

So then we look at the table itself – do its style and materials fit the time period? This is a little less clear in terms of its style. The pad feet (see the photo at right) are usually associated with the Queen Anne style, which was popular during the later 1700s (after the Revolutionary War) and early 1800s in America. Is this an early version of the Queen Anne style that was in Forty Fort in 1778? Was the table top placed on a newer base and legs sometime between 1778 and 1910? These questions require additional research and consideration, although it seems reasonable that at least part of the table, and quite possibly, the entire table was used on July 4, 1778, when the capitulation was signed. 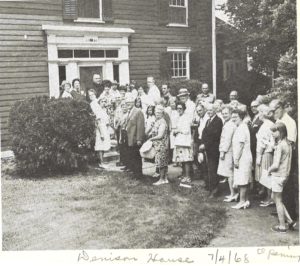 But, don’t take our word for it – come see the table and decide for yourself! The table is on view at the Denison House in Forty Fort. The house is open for tours on Sunday afternoons between Memorial Day weekend and the end of September. In the photo at left, you can see the crowd that lined up for a tour of the house on July 4, 1968! The house looks a bit different today – it has been restored to its 1790 appearance to reflect how it looked when Nathan Denison and his family first moved in. You can find more information about the Denison House, hours and tours here: https://luzernehistory.org/visit/denison-house/.

Thanks for reading – we hope you will come back and check out future posts, as well as tell your friends and family about our blog!