Hobo Hat – “Bound for a trip around the world. When shall we meet again?” 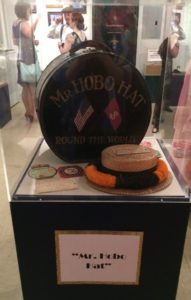 In 1922, an imaginative shipping clerk at the Delaware & Hudson freight station in Wilkes-Barre decided to take an old straw hat and send it on a trip of its very own to see how far it could go. It was not a completely original idea; word of a traveling hat was found in a North Carolina newspaper from 1908. However, this Hobo Hat was the first to travel around the world!

Patrick Fagan was the man who started Hobo Hat by sending it off on a freight train bound for the Pacific Coast on September 5, 1922, as a way to advertise the good shipping and handling service of the freight line. Fifty post cards were attached (see photo of one below right), along with a note asking those freight agents who received the hat to send back a card telling of its travels, and to please keep the hat going. Mr. Fagan received postcards from Massachusetts, Chicago, and California, before receiving word that the hat was going to be traveling to the Orient via Hawaii, thanks to some friendly staff at the Matson Navigation Company freight office across the country!

In March 1923, Mr. Fagan received a post card from freight agents at Yokohama, Japan telling of the arrival of the hat in good condition, and that it was being sent next to Hong Kong. The hat also traveled to West Australia, Java in the Dutch Indies, South Africa, and Brazil, before coming back to Hawaii after two years (see photo below of Mr. Hobo Hat in Singapore!). By this point, “Mr. Hobo Hat” was a famous world traveler and was traveling aboard the

ships of the Dollar Steamship line. According to a newspaper article from the Wilkes-Barre Record on March 13, 1925, the hat was presented to the governor of the Territory of Hawaii, Wallace R. Farrington, and members of the Senate and House of Representatives temporarily suspended business in order to meet the world traveler!

Apparently, escorting Hobo Hat around the world was good advertising for the Dollar Steamship line, because it made another circuit of the world aboard one of their ships, the President Garfield, before arriving back in New York in May 1925, traveling in style in a $3,000 cabin, rather than the cargo hold! The owners of the steamship line also had a specially-made hat box created to house the hat, crafted of leather and with its name printed on the front. A photograph of the hat and its box, Captain Robert Dollar, R. Stanley Dollar, and other “dignitaries” appeared in the February 24, 1925, issue of the Philadelphia Inquirer (and other newspapers – see below right). 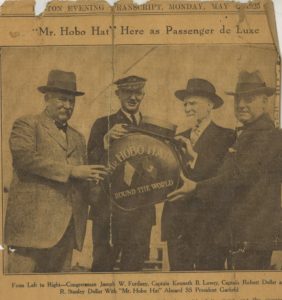 When Hobo Hat finally returned home after all his travels, he was displayed in the window of MacWilliam’s Store in Wilkes-Barre in June 1925 to coincide with Poppy Day for the American Legion, which raised money for the wounded veterans of World War I and their families. After that, the next we hear of Hobo Hat is in 1935 when he came to the Wyoming Historical and Geological Society (now the Luzerne County Historical Society) to be displayed, along with his “entourage” of hat box, autographed ticket, postcards, luggage tags and photographs, and ended up staying to become a permanent part of the collection (donated in 1959 by Patrick Fagan). In addition to various foreign dignitaries, President Calvin Coolidge’s name is among the now-faded signatures to be found on the ticket, testifying to the widespread popularity that Mr. Hobo Hat once enjoyed.