FIC: Stories of items “Found in Collection” #2 – Snow White and the Seven…… Shoes? 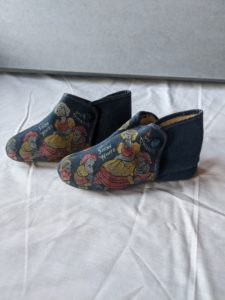 The following is the next in a series of blog posts titled “FIC: Stories of Items “Found in Collection”. FIC is a museum industry term for items that were, well,  found in a collection. The levels of provenance for these items often vary, and researching these items and tracking down why they are in your collection is a part of any curatorial employee’s job. Our Museum Manager, Allyson Earl, is back with a rather interesting pair of shoes, and the story of the child they belonged to.

While moving the textile collection into new, acid-free boxes (made possible by a grant from the NHA!), we came across a pair of tiny shoes, and were instantly enamored.  They’re an unusual style, with a snap closure on each side at the ankle and Snow White and the Dwarves painted on blue leather.

According to our records, they belonged to Diane Cottrino and were purchased from Gordon’s Kiddy’s Shop in Nanticoke.  Diane was born in Nanticoke to Steven P Cottrino and Helen Graboske Cottrino on January 21st, 1937.  Unfortunately, Diane’s story is sad and short lived.

In January of 1939, Diane became sick from a streptococcus infection.  The infection moved to her ear and complicated her illness, and although a mastoidectomy was performed on February 7, she died on February 12 at two years old.  She was buried at Hanover Green, where her parents and two older sisters eventually joined her.

Because these shoes belonged to Diane, though, we can determine that they were purchased sometime around 1938 or 1939.  Perhaps the most identifiable ‘Snow White’ today is from the 1937 Disney movie ‘Snow White and the Seven Dwarfs.’   It was logistically and technically challenging, and, by using advanced animation and camera techniques, greatly impacted the film industry and popular culture.  It’s no wonder, then, that contemporary children’s shoes would feature similar, but not identical, characters.

‘Snow White and the Seven Dwarfs’ is inspired by ‘Little Snow White,’ a tale from Germany recorded by the Brothers’ Grimm around 1812.  This story is a folk tale, and usually passed down through oral tradition, by one person telling it to the next.  In the original story, Snow White’s mother wished to eat her daughter’s liver and lungs to become the fairest, and tried three times to kill her.  The poisoned apple is the third attempt, and a piece gets lodged in Snow White’s throat.  The piece is eventually dislodged when a servant who is tasked with moving Snow White’s glass coffin from room to room gets annoyed and smacks her corpse, and Snow White lives again.

Oral traditions in themselves have wide variations depending on the speaker, where they’re from, and what they value.  ’Little Snow White’ is no exception.  Gold-Tree and Silver-Tree, a Scottish version of the story, features a poisoned ‘stab’ and polygamy.  ‘The Death of the Seven Dwarfs’ from Switzerland tells the of how seven dwarfs take in a young girl and are murdered because of a misunderstanding.

There’s a lot of history connected to this simple pair of shoes, and they are a valuable asset to our collection.