FIC: Stories of items “Found In Collection” #3 – The Evolution of a Uniform

Most of the following piece on the Brookside Yanks and the jersey in our collection, was written by Operations Director Mark Riccetti, Jr. and published over a year ago in our LCHS newsletter Forecast. However, further research has uncovered a photograph of the team and individuals mentioned in the article.  So as part of our “FIC” series, we reprint this article along with a new addendum on the photograph.

Every now and then we are lucky enough to get an artifact in that shows a fairly complete picture of the evolution of a piece of history. During the autumn of 2018 we were lucky enough to get a donation here at the Society of just such a piece. Mr. Jerry Matcho donated his father’s uniform from his days as a player/manager for the Brookside Yanks baseball team. The Yanks were one of the better semi-professional teams in the W-B area, and played their home games at Hollenback Park while being based out of a café on the corner of Madison and Elm. The Yanks are a fantastic example of the local community semi-pro baseball team that nearly every town of any real size had in America from the late 19th century to the 1960s or so.

The uniform, which belonged to Michael Matcho and dates from his run with the team during the 1940s, is a great piece as it shows where baseball uniforms had come from, and where they were going in terms of design. When baseball began in the New York City area in the 1840s, men simply came to practices and games after work. So, the first “uniforms” were their clothes. Men wore button down shirts with detachable collars and cuffs, vests and jackets. They simply removed the jacket, collar and cuffs, and played. Thus, the classic style baseball uniform of a button-down shirt with what we now call ¾ sleeves and collar trim with a vest over the top that we all know was born. The Colorado Rockies and Arizona Diamondbacks (alternate jersey) still have these style uniforms. 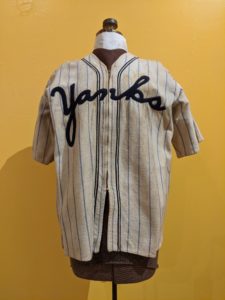 Modern uniforms (for the most part) are still button down, and feature highlighting around the collar and button areas, this is visible on the Yanks jersey as well, (Pictured right) giving us a picture of where jersey design was headed, pullover jerseys aside. However, the Yanks wore zippered jerseys! This was actually common in MLB during the 1930s and 1940s, the White Sox first wearing Zippered Uniforms in 1937. By the early 1960s 12 teams wore zippered uniform. The fad died out just as quickly however, as by 1975 only the Phillies still wore them, and wore them until 1986 in fact!

Also in the “same, but slightly different” category, the lettering on most baseball jerseys nowadays is still sewn on, although the stitching is not nearly as visible and the letter/numbers are more blended into the whole package, rather than looking like pieces of cloth added on later, which of course they were! On the back (below left) there is of course no name yet, a practice 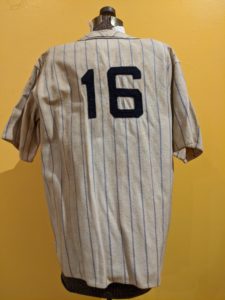 that a few teams (the Yankees, Red Sox, and Giants) still adhere to today. There is the number 16, however, since by the 1940s numbers had become commonplace after famously being made popular by the Yankee teams of the 30s (although the Cleveland Indians actually did it first).

Now, this is where the story could (and originally did) end. However, during this quarantine, we are attempting to share our photograph collection with the world via social media. Now, we obviously don’t have access to the entirety of our 60,000+ photographs, but we have been using a smaller collection of a few hundred of our most popular photos. And while looking for one of our daily posts, I came across this, a 1951 team photo of the Brookside Yanks! (Below) And even better, everyone is identified! So, I immediately began searching for Mr. Matcho. And sure enough, there he is, top row, far right. However, as you can see, he is out of uniform. So, it appears that by 1951, Mr. Matcho’s days as a player manager may have been over, but he still was managing the team. So not only are we lucky to have an artifact (the jersey) that shows how design and style evolved, but we also have another artifact (the photo) that shows the former piece in use and beyond. This is one of the finest examples of our collections, despite being separate, tying together to fill in the whole picture. 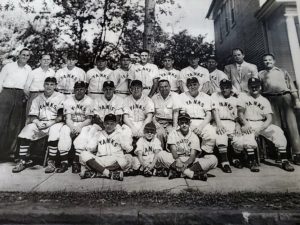