From the Wilkes-Barre Record – A Ghastly Find! 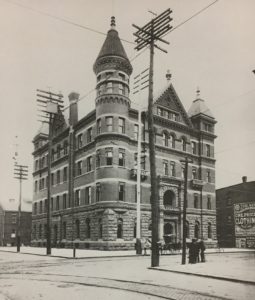 As the afternoons get darker and the wind howls and moans, we thought we would share this spooky newspaper clipping from 130 years ago…

“Yesterday forenoon a policeman crossed Public Square going towards the police office carrying a parcel wrapped in newspaper and followed by a score of men and boys. Much comment was excited as to the contents of the parcel. Inquiry being made, it was found to contain the hideous looking remains of a human arm. Evidently that of a grown man, the bones were long and stout, the hand sinewy and gaunt. The flesh had nearly disappeared and only a few dried sinews remained, even these having been eaten away from the longer bones by rats or other vermin. The dried tendons of the hand remained. A few threads of cotton clung to the relic, apparently the remains of grave clothes or some wrapping. The arm was found by a number of boys on the city dumping ground, where it had been dragged about by dogs or kicked under foot by passers by. No further remains could be found, and this probably came from some cellar on the site of the old burying ground.”

The “old burying ground” that is mentioned in the article above was the original Wilkes-Barre City Cemetery, located where City Hall now stands, at the corner of South Washington and East Market Streets, northwards towards Union Street. The first recorded burial there dates back to 1773 – a young son of Col. Zebulon Butler – and burials continued until 1856, over 1,500 of them. The city of Wilkes-Barre was rapidly expanding in the mid-1800s, and this land was prime real estate. Bodies began to be removed to Hollenback Cemetery, which opened in 1855, and many more were removed later into the new (and current) City Cemetery in 1870. Ground was not broken for City Hall until April 1893 – ample time for bits and pieces of old burials to go astray. In fact, we know that remains from the old cemetery were still being found from time to time as the years went by: 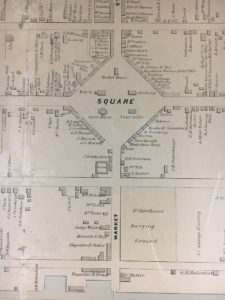 “Several parts of skeletons exhumed from the old cemetery lot where the city building is now going up are knocking about in the alley, unburied.” (From the Wilkes-Barre Times Leader, The Evening News June 17, 1893.)

“Skeleton Found. While excavating for building on East Market Street…The site was formerly an old cemetery and a number of years ago the bodies were ordered removed to the City cemetery. The workmen in removing them neglected to take all and as a result portions have been found from time to time, when excavations are made on the cemetery site.” (From the Wilkes-Barre Times January 11, 1907.)

“Bones of a person believed to have been buried at least eighty years ago were found yesterday by workmen excavating for a new front for the building at 15 North Washington Street, formerly occupied by Palace Laundry.” (From the Wilkes-Barre Record February 23, 1933.)

As if all of this information wasn’t enough to give you the shivers, another news article found later in the Wilkes-Barre News, from the same day as the original article found (June 4, 1889), gives slightly different information:

“The bones of a human arm were found on the dumping ground near the gas house yesterday. They turned out to be an arm that had been for many years in Dr. Ingham’s barn and had been thrown out with some rubbish.”

Apparently, this was enough explanation for the inhabitants of the time, as no follow-up articles or information can be found regarding where this mystery arm came from or who it belonged to!

The Luzerne County Historical Society’s Bishop Library has a treasure trove of area newspapers – and they are digitized and searchable on newspapers.com!  Don’t have a subscription?  If you are local, you can search our digitized newspapers on site at our library – just bring your tablet or laptop.  For more information about our library and our research holdings, visit our website: https://luzernehistory.org/research/bishop-library/.