The Badge of a Freemason – A Wilkes-Barre Masonic Apron 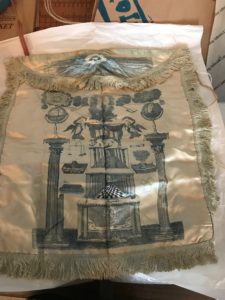 One of the most well-known Masonic symbols is the apron.  Freemasonry is a fraternal organization for men that teaches a system of ethics using symbols, rituals and ideas drawn from stonemasons’ regulations, Enlightenment philosophy and Judeo-Christian teachings.  The exact origins of Freemasonry are unknown.  At some point during the 1500s or 1600s in Scotland and England, groups of working, or operative, stonemasons created lodges into which they initiated members from both within and outside the trade.  These lodges developed what became known as speculative Freemasonry, which uses metaphors based on the traditions and tools of operative masonry to convey a system of ideas and ethics unconnected to actual building practices.

The fraternity’s aprons are inspired by the protective work aprons worn by actual stonemasons during the 1600s and 1700s.  Masonic aprons were worn around the waist at meetings.  Apron shape, color and design are determined by Masonic governing authorities, generally each state’s Grand Lodge, in the United States.

Freemasonry came to Wilkes-Barre in 1794 when Lodge #61 was formed.  By the end of 1795, the lodge had twenty members, increasing through the early 1800s.  In the 1820s, members of many local lodges were dissatisfied with the Grand Lodge of Pennsylvania, which had raised dues but was not sending its officers to visit “country lodges” to “instruct and enlighten” them.  So, the Grand Lodge of Pennsylvania in Philadelphia set a meeting of the “Grand Committee” for February 25, 1823.  The “Grand Committee” was to be made up of three members from each subordinate lodge in the state and would “take into consideration the alleged grievances of the subordinate lodges.”  Lodge 61 decided to send General Isaac Bowman, Judge David Scott and Gould Phinney, Esq. to the meeting as its representatives.

In preparation for the meeting, Lodge #61 asked asked local engraver, Samuel Bettle to “prepare suitable and proper Masonic aprons to be worn” by the lodge representatives at this meeting.  The aprons were white satin with blue silk fringe and “embellished with an elaborate symbolic and emblematic design drawn, engraved and printed by Bro. Bettle.”  Bettle had been initiated in the lodge on January 20, 1823.  Samuel Bettle was the son of John Bettle who came to Wilkes-Barre in 1810 from Philadelphia to be the cashier at the Philadelphia bank branch.  Samuel was an engraver and silversmith who had his business on the north side of Public Square around 1815.  In 1819 and 1820, he is recorded as living on Northampton Street, near River Street.

An example of one of Bettle’s aprons is now in the collection of the Luzerne County Historical Society (see image above). The engraving is signed by Samuel D. Bettle with a date of 1823. However, the design was actually drawn and engraved by another man about twenty years earlier in Connecticut – Thomas Kens 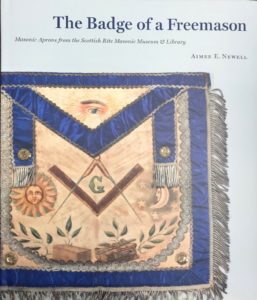 ett of New Haven (you can see an example of that apron here: https://nationalheritagemuseum.typepad.com/library_and_archives/thomas-kensett/). But, we should not be too hard on Bettle – there were no copyright laws at the time, and he was hardly the only engraver to “repurpose” the work of others.

To learn more about Freemasonry and other fraternal groups in Luzerne County, visit our exhibition “Mysterious Customs and Warm Charity”: Fraternal Organizations in the Wyoming Valley, at the LCHS Museum, 69 Rear South Franklin Street, Wilkes-Barre [as of October 2019]. If you are interested in learning more about Masonic aprons, call, email or stop in to purchase a copy of The Badge of a Freemason: Masonic Aprons in the Scottish Rite Masonic Museum & Library Collection by Aimee E. Newell.