Gershom Prince Adds A New Dimension To A Well-Known Story

There are numerous events throughout ancient, or world, or American history, that are so well-known, with stories told time and again, that nearly everyone knows them. On the local level, the Battle of Wyoming is probably the best example. Everyone knows the “Cliff’s Notes version”: on July 3, 1778, a combined force of Iroquois and Loyalists attacked the Wyoming Valley, killing most of the outnumbered American soldiers there. The remaining American civilians were forced to flee, and the area‘s network of frontier forts was surrendered to the British. However, many subplots lie just under the surface. For African American History Month, we will be looking at one of those. 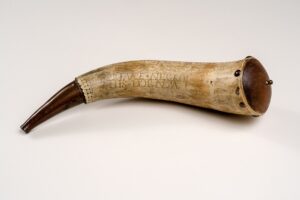 An American named Gershom Prince was among those killed at Wyoming. A powder horn was taken from his body after the attack and preserved. Years later, to remember the earth-shattering occurrence that took place here, a monument was erected to the Battle of Wyoming, for those who lost their lives. In fact, their remains are buried there, in a vault under the monument itself. And inscribed on the monument is a list of the fatalities, in order of names by rank. The last name listed under the rank “Privates” is “Gershom Prince, colored.”

And that one line on a silent marker opens up an incredible story. Gershom Prince was born in Connecticut in 1733 and settled in the Wyoming Valley in what is now northeastern Pennsylvania. He carried his powder horn in two wars: the Seven Years War (French and Indian War) and, 17 years later, the Revolutionary War. During both wars, he served as a free man, as an aide to Captain Durkee of the 4th Connecticut Regiment. During the Revolutionary War, Prince survived the battles of Germantown and Brandywine, as well as the winter encampment at Valley Forge before meeting his end at Wyoming.

And this is where his powder horn, carried throughout his service, and recovered from the field at Wyoming, comes in. The elaborately carved powder horn of Gershom Prince, a black soldier who served and died in the Revolutionary War, a cow’s horn that was used to store gunpowder – she 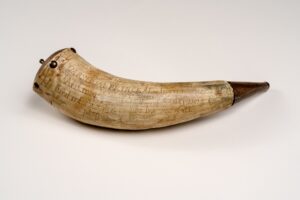 ds light on the little-known stories of not just Gershom himself, but of black soldiers, both free and enslaved, who fought during the American Revolution. The horn is carved with Prince’s name as well as exquisite artwork including detailed images of trees, forts, and scenes from everyday life, giving a unique glimpse into his experiences. Many soldiers would decorate their horns, using them as a journal and marking areas or battles they were in.

The horn has been a cherished piece of the Luzerne County Historical Society’s collection since it was donated by Prince’s family in the 1950s. However, it is currently on loan to the Museum of the American Revolution (MAR) in Philadelphia. “Very few powder horns of black Revolutionary War soldiers survive,” said Dr. Philip Mead, Chief Historian and Director of Curatorial Affairs at the MAR. “This one is probably the only surviving powder horn of a black soldier who was killed in action. It is a moving testament to the contributions of African Americans to the freedom of this nation at its inception.”

Historian and author Denise Dennis, a descendant of Prince’s family, is the founding president of The Dennis Farm Charitable Land Trust, which preserves the 153-acre Dennis Farm in Pennsylvania’s Susquehanna County 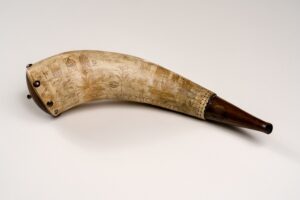 . The farm was settled in the 1790s by Dennis’ great-great-great-great–grandfather, Prince Perkins (1750 – 1839), who served in the Revolutionary War and was freed for his service. “Knowing stories like those of Gershom Prince and other African American Revolutionary War patriots benefits all Americans by reminding us of our shared heritage,” said Dennis. “Their stories tell Americans that even during a time when most black people were held in slavery, there were African American sons of liberty who fought for the nation’s independence as well as for their freedom and that of their enslaved brethren.”

The Prince Powder Horn may not only be the best example of a black Revolutionary Soldier artifact, but also the best example of an artifact that can add an entire layer to a story that everyone thought they knew. And in a time long before widespread media or any type of photography artifacts like it (and the stories they tell) are quite literally priceless.