The following blog post is a modified version of a column that appeared in the December 2020 edition of The Westside Bulletin. The article originally ran to promote a lecture the Society was planning on local epidemics. That lecture is now available for view on the LCHS YouTube channel, and we are reprinting this article here as a preview for anyone interested. The full lecture can be found by clicking Here.

No doubt you probably heard, many times in fact, that this past holiday season was one, “like no other”. But will it really? Yes, the coronavirus has certainly changed the way we’re able to celebrate, but it isn’t actually unprecedented. Luzerne County has been hit with numerous epidemics throughout its history, and several of them occurred during the festive season.

Typhoid fever was a nasty disease that ran rampant through the area throughout much of the 1800s. Patients

suffer from a high fever, nausea, vomiting, and break out in rose-covered spots. While easily curable today with anti-biotics, typhoid was a disease that in the Victorian Era lasted for weeks and was often fatal. Caused by unsanitary drinking water, Plymouth saw a large epidemic break out in 1885 when sewage found its way into a small creek. Later in 1889, Wilkes-Barre saw an outbreak when pipes were replaced in the city lines. The response was very similar to today, towns were quarantined, large gatherings were banned, and many events were cancelled. Newspapers urged people to stay home and keep their persona and belongings sanitary. Debates raged over the actual source of the infection and an early version of what we know as germ theory began to be discussed openly.

Things escalated in December 1901 with a massive outbreak of smallpox just in time for Christmas. Smallpox is a horrific disease now thankfully eradicated wherein the victim’s skin is covered in fluid-filled scabs that eventually scar over, accompanied by a high fever. As newspapers reported on the rising case and death numbers daily, travel across the Susquehanna River was shut down in early 1902. Doctors began vaccinating local residents in 1902 (Smallpox being the very first vaccine ever created in 1796) In order to get over to the East bank or vice-versa, a traveler had to show a certificate from a doctor stating that they were vaccinated for the disease. Meanwhile, the Anti-Vaccination Society of America began advertising in our local papers, stirring up anti-vaccine feelings and questioning the science of the inoculations. 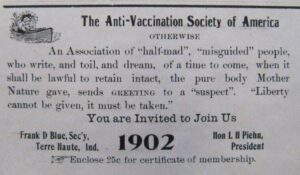 Finally, while not on the level of the previous two outbreaks, Scarlet Fever was a constant threat to the area. Scarlet fever is similar to strep throat and causes fever, swelling of the tongue and a rash. Causes popped up for well over 100 years locally, usually infecting children. In the December 29th 1911, holiday postcard below a “Mrs. B” explains to Wilkes-Barre resident Lydia Evans that they will not be able to visit this year, as one o their children contracted scarlet fever over Christmas. So Wilkes-Barre residents had a 1911 holiday season not too different from our own! If you enjoyed this, be sure to watch the full lecture on the Society’s YouTube page, where we go into much more detail on these outbreaks, as well as the 1918 Influenza epidemic. We also discuss hospitals, mask-wearing and more! 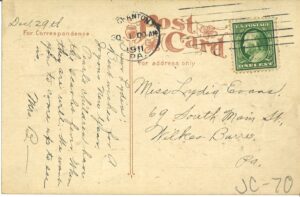