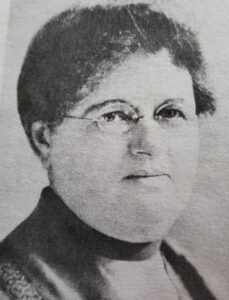 Just as last month was African-American History month, March sees another notable historical celebration in Women’s History Month. And just like last month with William Camp Gildersleeve, this month we bring you the story of another prominent resident of the County, Miss Mary L. Trescott (left).

Mary Luella Trescott was born in 1861 to Miller Barton Trescott and Permelia Stevens. A very bright young woman, Mary had aspirations of practicing law, however, she realized that would not be possible in the NEPA of the 1870s and 1880s, so she moved to Poughkeepsie New York. After graduating from Eastman Business College, Mary began studying the law under attorney (and later US Representative) Henry Wilbur Palmer, who was a member of the bar in both New York and Pennsylvania. After graduating in 1893, Mary practiced law in New York for two years until October 14, 1895, when, with Palmer as her advocate, she became the first woman ever admitted to the bar in Luzerne County Pennsylvania. During her early years, showing how a woman didn’t fit in the bar systems of the time, she’s often listed on registers as “M.L. Trescott” rather than under her legal name.

For years, Mary was an active attorney on the county bar, most notable for being the first woman to ever be involved in a case before the PA State Supreme Court in 1901, and for her actions involving the so-called “Hungarian Shanty” women. On October 28, 1894, a house known as the “Hungarian Shanty” was destroyed in a dynamite explosion, killing 3 and injuring 8 others. Arrests were made of five African American suspects in June 1895, including Hester Brace and Sarah Miller, wives of two of the male suspects.  Trescott, however, was able to obtain their release under a writ of habeas corpus in 1897, after more than 3 years of incarceration.  Otherwise, she was known to most county residents as the sole female photograph in the yearly county bar association publication, and for being the only county notary public for quite a while.

However, that all changed in 1930, with the passage of the 19th Amendment. Now, not only could women vote, but they could now (legally) run for office (Mary was one of a number of women who had made campaigns even prior to 1920). Trescott wasted no time, becoming the first woman ever on the ballot in the county by running for school board. While she dropped her campaign before the actual election, her name was still on the ballot, and she did become the first woman ever in county history to receive votes.

Later, upon actually being elected to the school board, she was not just the first woman member, but the first female officer (above right), and eventually its first woman president. While on the school board Trescott not only fought for better wages for teachers and for more readily available kindergarten for small children (her main campaign promise) but also joined with Ellen Webster Palmer, the wife of her mentor Henry Palmer, in forming the Boys Industrial Association, to fight child labor and get local children out of the mines into schools.  The two became the two faces of the child labor fight in our area, with Palmer often providing the moral arguments against it and Trescott bringing the legal arguments.

Trescott would be appointed the first woman referee in US Bankruptcy Court and would tout this and her many other “firsts” in a newspaper ad for unsuccessful 1927 run for Judge. (below) And while she didn’t win, that campaign was one final “first” for Trescott, as she became the first woman ever to run for Judge in the Commonwealth of PA. Mary L. Trescott passed away in 1935, after seventy-four years of pretty much nonstop trailblazing. 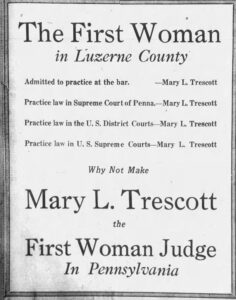